In 2009, almost 45,000 houses across the United States experienced fires resulting from electrical malfunction or failure, according to the National Fire Protection Association (NFPA). These fires claimed the lives of 472 people, and caused 1.6 billion dollars in property damages. These sobering statistics prove that as a homeowner, you must take action to protect your family and property from sudden demise and destruction resulting from hidden home electrical safety problems. 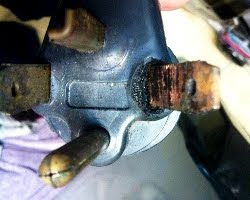 This week we handled a residential service call to correct what was close to causing a very serious house fire. A home with a 220v electrical outlet for a dryer, almost 25 years old, had apparently been overheating for quite some time.

The dryer plug-in had begun to melt and become fused to the electrical outlet. (see melted rubber at prong. prong had been cleaned of a coatin gof melted plastic from the receptacle.) The wiring in the junction box had melted insulation (see bulging black wire insulation in lower photo). 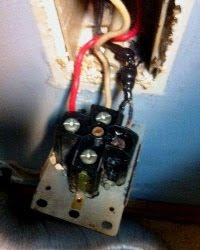 For just over $100 we repaired the wiring, repalced the outlet and replaced the dryer's electrical cord. The owner reported having smelled something unusual for several weeks. This problem never tripped a breaker but fortunately caused the dryer to stop working. The home owner discovered the problem when trying to disconnect the electrical cord to service the dryer. This is a common situation in older homes.

Are Your Old Outlets and Wiring Safe

Numerous telltale signs of old outlet and wiring malfunctions usually exist way before an all-encompassing house fire consumes people and possessions. These include regularly blown fuses, tripping breakers, flickering or dimming lights, and a faint burning smell coming from an appliance or kitchen gadget. Other home electrical safety concerns include warm-to-the-touch switch plates, or even discolored switch plates. These occurrences can usually signal overheated wiring that might soon turn into a full-fledged electrical fire.

Additionally, if your home was built in either the 1960s or 1970s, the electricians could have used aluminum wiring in your home, instead of the now-standard copper wiring. This aluminum wiring is a safety hazard in itself due to the fact that its wiring connections can loosen over time. When this happens, gaps between the connectors and the actual wiring can overheat, and cause fires when overextended from constant lighting and appliance use.

Often, homeowners feel confident that they are preventing home electrical fires by simply replacing old outlets. Sometimes changing out outlets does eradicate loose wire terminal and internal connection problems. Old outlets that have partially or completely come out of the receptacle should be immediately replaced, also. However, more often than not, the outlet is not the culprit that initiates house fires. Unfortunately, replacing old electrical outlets and fixtures will only lead you to the conclusion that the problem is inside the walls of your home.

The Danger is Usually Inside Your Walls

Truth be told, if you are were not the first person to own your home, you might find that several different handymen or women tried to fix electrical problems within the walls of your home themselves, instead of hiring a certified electrician. Therefore, you might be stuck with a literal mess of different kinds of wiring pieces and parts. If this is the case, trying to fix the problem yourself would probably only serve to make it worse. It is highly unlikely that you know the ins and outs of several different types of wiring, or have the knowledge on how to correctly replace the wires without burning your house down.

Upgrade for Style and Energy Savings

The first thing many people usually experience after hiring a licensed electrician is massive energy savings. Because the newly repaired and/or redesigned wiring within your walls is no longer overloaded, energy expenditure decreases significantly. Additionally, you will find, like most homeowners, that the new outlet covers you picked out for the home improvement project really give each room's décor the added boost it so desperately needed.